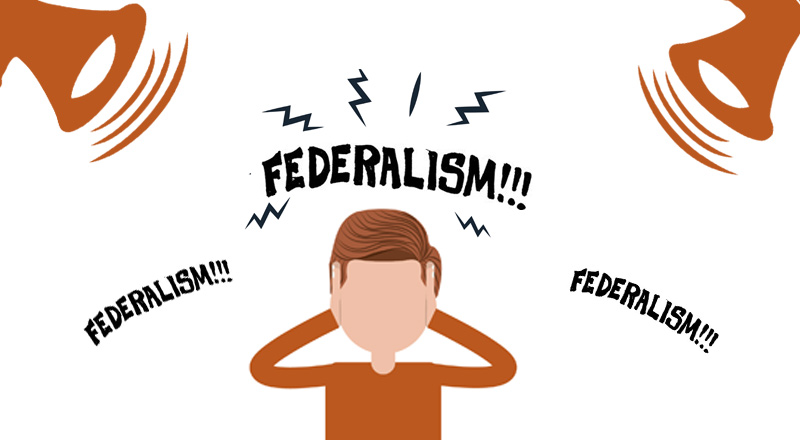 In common parlance the term “Federalism” means government consisting of a group of regions that are controlled by central government, but more precisely it is the governmental system that divides up the power between a “strong national government” and “smaller local government”. Therefore it cannot be denied that Indian constitution is “quasi federal” as quoted by KC Wheare. The same principle has been reiterated by Dr. Jennings as “The union of India is a federation with strong centralizing tendency”. Centre is like a father figure who provides funds, teaches discipline, act as a last resort in case of contingencies and over and above it also has a right to control its actions upto a certain extent.

Various provisions embodied in The Constitution of India (herein after referred as COI) which gives indicia of the aforesaid mentioned principles and meanings. The law making power exists with union as well as states, but constitution has defined the limits of areas for which they have to make law, for instance central has exclusive power to enact law on the subjects mentioned in entries in list I (union) of VII schedule of COI, the states have exclusive power to enact law on the subjects mentioned in list II (state) of VII schedule of COI and in list III (concurrent) of schedule VII of COI both centre and states have power to enact law. However, in case of repugnancy on any law made by centre and state on any subject mentioned in concurrent list then state law shall be void to the extent of repugnancy Art. 254(1), moreover in order save such (state) law it has to be reserved for the consideration of the President of India and must have received his assent. This shows a sheer superseding power of central government over the state governments. In case of proclamation of emergency is in operation then centre has the power to legislate on state subjects (Art. 250). Failure of constitutional machinery of state results into president rule in that state (Art.360) and president rule means centre rule because President of India always works on aid and advice of Council of ministers with prime Minister as its head (Art. 74). There are certain directions given by centre to states for efficient working of the state as well as centre like railways, marines, roads, communications etc. Failure to obey such orders/directions might result into “failure of constitutional machinery” and consequent to imposition of president’s rule in that state.

However, it should be appreciated that such directions must be in conformity with law, and shall be justifiable and must also be in line with exercise of executive power of the union. In Goods and Services Act, 2016 a provision has been made to provide states with certain sum of money annually for 5 years in order to cope up with the financial losses to the state due to introduction of GST. This shows helping character of centre apart from ruling or directive character.

CBI (Central Bureau of Investigation) is constituted by the central government and is known as the special force of the central government i.e. Delhi Special Police Establishment (sec. 2 of Delhi Special Police Establishment Act, 1946 hereinafter DSPE). CBI is purely a central subject as mentioned in List-I (union list) entry 8 “Central Bureau of Intelligence and Investigation”. The peculiarity about CBI is that it cannot exercise the power and jurisdiction in a state without the consent of that concerned state (Sec. 6 of DSPE). However, the central government can extend the powers and jurisdiction of CBI for investigation in a state(s) (sec.5 DPSE). The other aspect is Supreme Court of India has also in some cases directed CBI to investigate, for instance Fodder scam in Bihar, saradha chit fund scam in West Bengal. So the question arises whether such direction by the SC to CBI to investigate in the state without the consent of the said state is violation of federal structure of the Constitution, it has been well decided by SC in case of STATE OF WEST BENGAL v/s COMMITTEE FOR PROTECTION OF DEMOCRATIC RIGHTS, WEST BENGAL, that it is under the power of judicial review of constitutional courts to direct CBI to investigate in a state without the consent of said state. Many a times CBI is not self sufficient to investigate and thus it require the state machinery as helping hand for that CBI needs to communicate its requirement for arrest or for investigation to the state administration/police. Like when CBI wanted to arrest Bihar former CM Lalu Prasad Yadav CBI contacted chief secretary of the state for support to CBI but it was all in vain, thereafter CBI approached the Army for seeking help to arrest former CM, but such request was also denied and later on it was asked to Chief secretary by the SC why the help was denied to CBI.

In recent West Bengal (WB) episode where CBI wanted to probe the Police Commissioner of WB in connection with saradha chit fund was arrested by the state police was an unprecedented event and is a sheer dent on the federal structure of the constitution. Mere entering into the residence of Commissioner of Police for purpose of investigation which has been backed by SC to investigate is nowhere an act forbidden by law and the WB state police have shaken the federal structure.

Whenever and wherever the act is silent as to the usage of discretionary powers, such powers shall be exercised judicially, justiciably and non arbitrarily. A check must be kept on such acts else it would lead to failure of constitutional machinery of state and Art. 365 read with 356 will be consequential effect and imposition of president’s rule is not a good sign for federal structure.