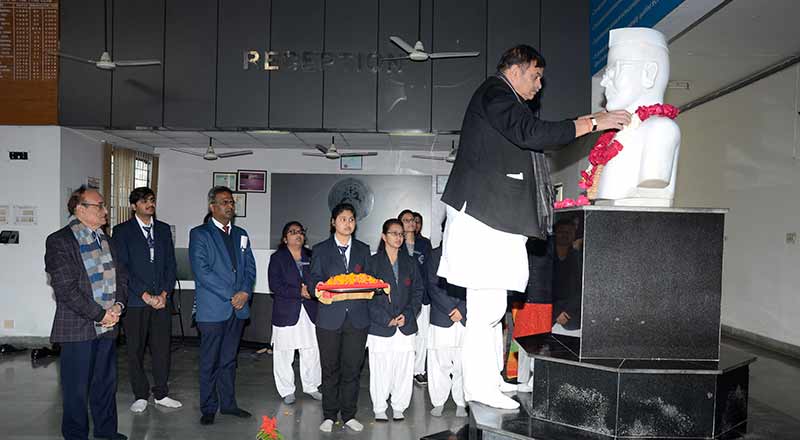 It is a morning to be proud of as our entire nation is celebrating the 70th Republic Day. On 26th Jan. 1950, the Constitution of India came into force and our country, India became the Republic. We celebrate this day as a festival every year in Shri Ram Murti Smarak Trust. The gathering for flag hostin ceremony was blessed by the presence of our honourable chairman Shri Dev Murti sir, Trust Secretary Aditya Murti sir, Trust Administrator Er. Subhash Mehra, Dean Academics Dr. Prabhakar Gupta and Dean Student Welfare Er. Ashish Kumar. The program started with flag hosting by Dev Murti sir followed by a National Anthem ‘Jan Gan Man’ sung by the girls of B. Tech 1st year. A speech was delivered by a student explaining how important the day is. Dean Academics distributed the scholarship to the meritorious students for their academic performance, he also told the days’s importance. Manan Jaiswal sang a song to boost up the national spirit of the public and then it was the chairman of the organisation who enlightened the gathering and finally the tyro secretary thanked the gathering for their presence. The ceremony was concluded with sweetening the day of the public by chocolate distribution.

Thereafter we had a cricket match among the two talented team of SRMSCET and SRMSIMS. The captain of SRMSCET team was Subhash Khare Sir and on the other hand IMS team captain was Aditya Murti Sir. The match got in favour of SRMSCET with a great performance of both the teams. There we had some other matches also of women team and kids team i.e musical chair, race, tambola etc.in parallel with this match. The programme ended with the distribution of prizes to the winners of the games .