Freshers’ party in any college is an event which every student eagerly waits from their time of admission. A grandeur freshers’ party event took place for the b.tech 2021 batch of SRMS CETR on December 15, 2021 at main auditorium of CETR campus. The entire event was based on the theme- “Inara”- an urdu word that aims to deliver a message of shining bright like stars in upcoming years ahead, to all the beginners. The freshers’ day was filled with excitement, joy, music, enthusiasm, laughter and happiness. The dress code for the event was “dress your best”.

The program began at sharp 10:30 am with the welcoming of all the dignitaries including trust secretary, Shri Aditya murti. The inauguration ceremony of the event was anchored by Ayush Mishra, Archana Mishra, Tushar Gupta and Deeksha Patel. This was followed by garlanding, Saraswati Vandana, Ganesh Vandana, Shiv Tandav Strot ki Stuti and some dance and singing performances. Address to all the freshers by trust secretary, Shri Aditya murti, marked the completion of the inaugural of the event.

Next section of the event started with several-singing (both mono and duet), group song, poetry, shayari, dance performances(both mono and duet), rap-singing (a blend of rap and a song) and a remarkably enacted movie spoof, all tremendously well-performed by the seniors and freshers as well, to inculcate the budding talent in them.this portion also included mock rock (performance containing songs acted upon with funny body movements and expressions) done exceptionally well by both hostellers and day scholars.at 12:30 pm, the function headed towards a lunch break venued at boys hostel mess.

After a singing and an open-mic performance, came the most awaited section of the whole freshers- the fashion show i.e., walk by the fresher boys and girls, which completed in a total of three rounds.all the three rounds focused on showing the hidden talent and interviewing the qualified and deserving participants that are to be awarded with titles and tags further.with so many admirable performances, games (balloon bursting, head-to-head and musical chairs) were also conducted by the fun team in between for the refreshment and keeping the audience indulged.

The winners of several games conducted are as follows:-

Various gift hampers were given to the winners of the respective games and they were really very enthusiastic, excited and happy after receiving their rewards. the filler performances by picking up the random persons from the audience or the crew also added cherry to the pie.

After all this, the party headed towards its end and there came the most awaited moment of the entire freshers’ party- “title and gifts distribution ceremony”. Once the results were out, it was the stage of achievement for the contestants. the title winners of Mr. And Ms. Fresher were Aman khan and Priyanshi Agarwal, respectively. the other titles and tags given were as follows:-

All awards were given by the jury members to the respective students, with the tags and a grand gift to all, and a crown of achievement to Mr. and Ms. Fresher- 2021.

Finally, the freshers’ party 2021 concluded with a vote of thanks by dean students welfare(d.s.w) er. K.k agarwal. 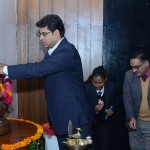 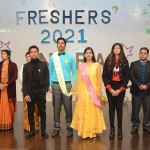 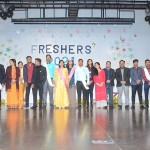